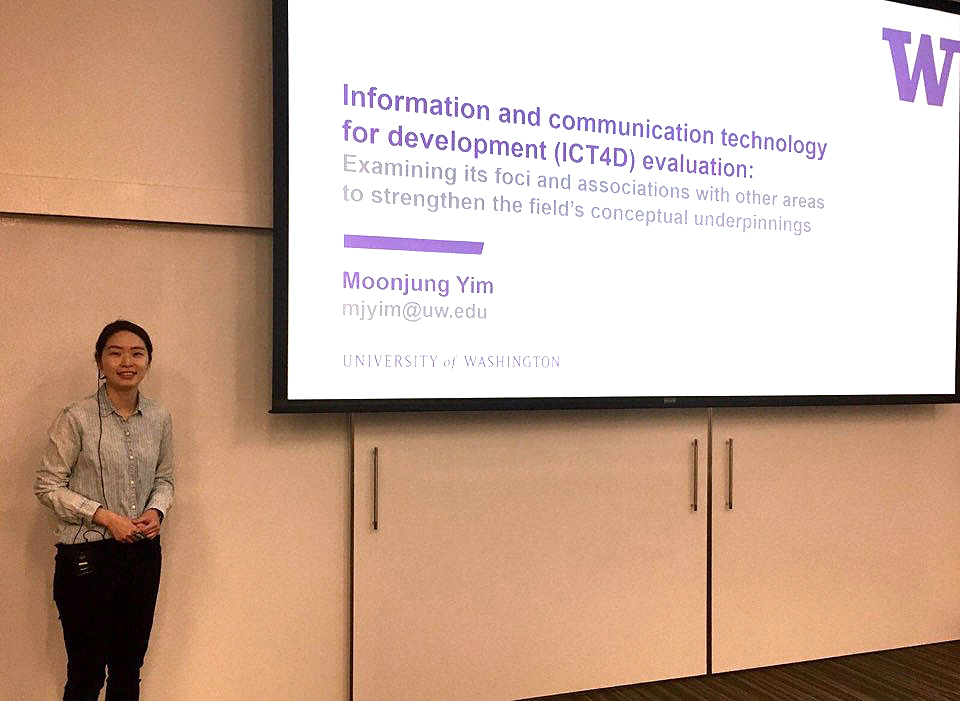 Moon at her dissertation defense in June 2019

Growing up in a time of socio-economic turmoil in Seoul, South Korea, Moonjung (Moon) Yim’s interest in the intersection of Information Communication Technologies (ICTs) and development began at an early age. As she puts it,

“I had broad questions about how we define development and advancement in society, and who defines it, where we are headed to, and how technologies can potentially influence, and be influenced by, the society.”

Moon constantly thought about these and other questions regarding her place in society, her cultural upbringing, and her broader connections with the world. Her curiosity was, and is, her greatest strength in the pursuit of knowledge.

Eventually, this questioning nature led Moon to her undergraduate studies in economics, where she asked herself what else could be learned in this field: “What if some of the assumptions of economic analysis models don’t apply in reality? What happens to our predictions and understanding of society?” Then, the questions led to her master’s degree in international development cooperation–where she wondered about the “large field” she was studying–and ultimately focused on evaluating ICT for education (ICT4E) projects in the context of the Global South. Most recently, her questioning led her to complete her PhD, with a research focus on ICT for development (ICT4D) evaluation.

What was it like growing up in a rapidly industrializing country, and later, studying development through the lens of technology and social change? Moon’s curiosity about development in South Korea, and the world at large, fueled her passion for learning. By focusing on these related areas of study, she has spent her time examining the outcomes and impact of technology use:

“Recently my research interest around ICTs and development broadened – from scoping development specifically pertaining to the Global South setting, to looking at human development and social change in a broader sense.”

Moon’s passion for this topic eventually led her to TASCHA, where she has contributed her critical eye to our Namibia Regional Library Evaluation project. First joining TASCHA as part of her doctoral research practicum, where she contributed to developing survey instruments based on a literature review, she later returned to TASCHA as a Research Assistant, analyzing the qualitative data that was collected during the project.

Chris Coward, TASCHA Senior Principal Research Scientist and Director, was the Principal Investigator of the Namibia project during Moon’s time as an RA. He spoke of her dedication to research, curiosity, and passion for the field.

“We couldn’t be more delighted with the work Moon has done at TASCHA. As a center, we strive to provide opportunities for students to learn new research skills and grow as independent scholars. It has been particularly exciting to see Moon develop her own research voice, bringing a valuable perspective to the research as we approached analytical decisions along the way. We congratulate Moon on completing her PhD are thrilled about what the future holds for her.”

Of her work with TASCHA, Moon said the respect she receives from researchers, inclusion on the team, and willingness to help her learn were some of her favorite parts. As a self-described “novice researcher,” Moon said she learned a lot about the tangible things–like data collection and analysis–but also the intangible ones.

“I learned that, what I think I know, might not be the full picture. I might only know a small or partial picture. Not only triangulation of different research methods, but also triangulation of different researchers’ perspectives, is important. That was a really valuable thing to learn during my PhD years as a novice researcher, and this really motivates me to constantly think ‘what do I know and what do I not know and how do I know that.’ It motivates me to communicate with other researchers and I think that will be a very valuable thing that I will continue to do, even after I graduate.”

Among other experiences at the Information School, her work at TASCHA played a big part in the process of developing her research interests. She wants to continue examining “ICT use and social outcomes” in the future and hopes to incorporate some of the behavior she learned here:

“I saw how the researchers actively shared their different interpretations of data and perspectives…how they worked to accommodate different views to arrive at the approach which best addresses the research aims and objectives. Seeing that process and trying to participate in it really was valuable. After I graduate and work for a research organization, I will try to bring the lessons learned and what I saw from the TASCHA researchers to the workplace.”

Now that her PhD studies are complete, Moon plans to travel back to South Korea. Her curiosity has led her home, where she will continue questioning the world around her, and investigating the intersection of technology, social change, and development.

Learn about Moon’s Work at TASCHA